Yesterday held two very significant milestones for Team Bicker. Sadly, one of those I never want to experience ever again. 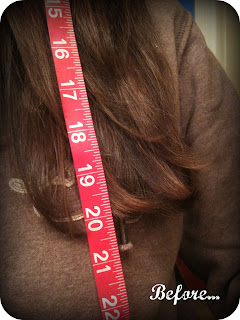 I chopped it! 20 inches chopped down to a pile looking like some creepy sleeping animal on the floor. 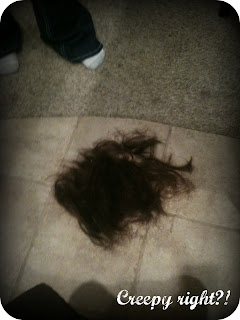 What was left after said pile appeared on the floor? BOOM. 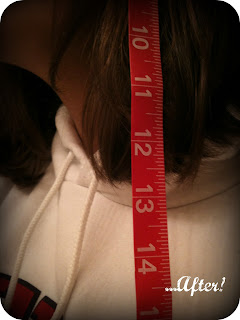 As ridiculous as it was, my stomach was actually doing flips during the decision process. Yea yea...I know...It's just HAIR. //ahem//

I get it. I totally do! This has been the longest I've gone without doing something drastic with the scissors and overall I had just become content with ... length. Until I started weighing the pros and cons. Cons: Drytime. Product, product, product. Straighteners, curling irons, round brushes. Weight. Toddler-grabability (what is a kid supposed to do when you have nowhere for your hair to go but in his face as you manuever him into his car seat next to a car that parked so close I could scratch his car door with the keys sticking out of my pocket?!). And then you have the mother of all cons...the mess factor. I reached a new level of mommyhood status when I had snot dripped on my hand and sprayed into my hair all in one day. Um yea. All the Pro's didn't even matter after that.

And there you have it. Milestone #1 - Hair Gone = Success!

Milestone #2 ... was tramatic for all parties involved. I'm pretty sure this face sums it up. 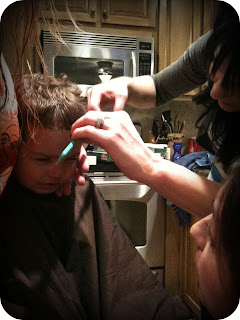 My little guy has hair that is prone to Kramer tendencies and to trim things up a bit, I thought J would get his hairs cut after me.

Sobs. Hand grips of death.  The Mommy's taking turns with promises of cookies, play time, and reminders that he was NOT losing a limb. It was a haircut!! A trim!!!! Gone is the happy haircut child.

Milestone #2 - Last haircut for a long long time for little man. This mama can't handle another sob-full plea. Talk about ripping my heart out. Coincidence that the poor guy was plagued with bad dreams last night?? HMMMMM???? Yea. Not happening again for a long long time. 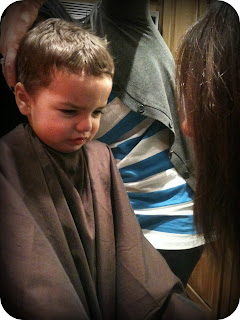