For the Love of Buzz.

It never fails - A necessary trip to Target right before nap time. You would think that a mama would learn from previous experience. Yea... Apparently I needed to experience Target in a different light.

Don't get me wrong! For the most part, J loves Target. He has a blast checking out the $1 section. He Ooh's and Aah's his way through the toy aisles with me! He's awesome like that.

First stop was the sunglasses. Little man insisted on a few minutes of modeling. This kid can definitely rock aviaters like it's nobody's business. Why he picked out a pair of black 80's plastic frames for me I will never know. Those quickly worked as an awesome headband. After the orange, blue and green pairs were given a run, little whines started to creep out meaning my time was quickly running out.

And then we found it! IT being a sweet deal combining the words Buzz Lightyear and Clearance. Score for J and score for Mama! With a 2-Year Old Birthday and Christmas quickly approaching in the same month I'll grab any deals I can find so as to avoid the overpriced, picked over toy aisle during December. 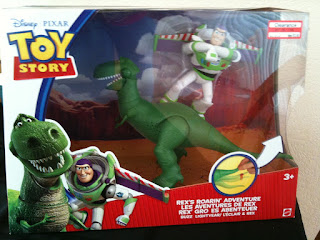 Even though Rex and Buzz were fully encased in their plastic box it was seriously love at first site. I'm pretty sure I overheard him singing to them. It was just that awesome.

And then all that awesomeness came to a screeching halt. The cashier needed to scan the beloved Buzz. Hold on to your hats.

It was as if I literally cut off his arm and gave it to the poor unsuspecting gal!

Oh the tears. The sobs. The inhumanity!!!

Seriously I think the Buzz box left his hands for two seconds. TWO seconds! It's shocking how loud a kid can get in just two seconds. I'm sure I got a few "looks" from my fellow Targeters. And being that it was naptime...I didn't blame them in the least. ;) Yep, I will take the blame for the crazed human sitting in my cart.

5 minutes later. Our state of affairs had changed. 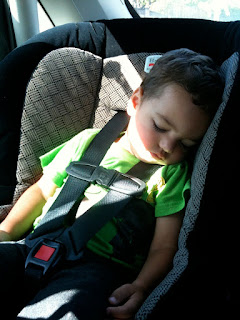 For those of you wondering, I WAS able to successfully transfer a sleeping boy AND sneak the Buzz-O-Wonder back to the guest room for a later day.


P.S. Remember those 80's sunglasses I used as a headband? Yea...those little beauties came home with me. What's worse? Forgetting they were on my head and WALKING out with them. Oh. My. Word. I will be returning those with a pathetic apology...;/
Posted by Dana at 8:16 PM